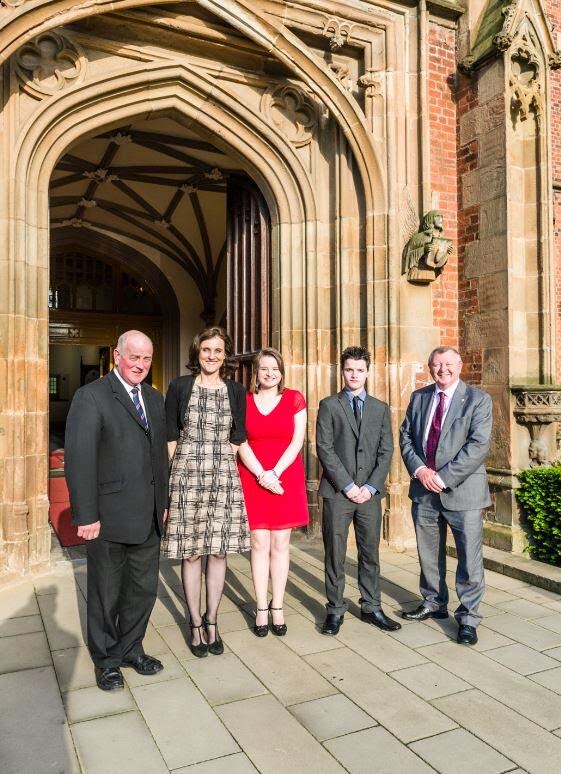 Northern Ireland Secretary of State, Theresa Villiers, has commended a group of Orange students for successfully completing a leadership course co-ordinated by one of the Province’s leading universities.

Ms Villiers attended a certificate presentation ceremony at the Belfast campus on Thursday evening.
As part of the 12-month course, students were provided the opportunity to acquire a knowledge of leadership and management approaches, and the opportunity to analyse the concept of leadership and the role that leaders play in society. Participants also travelled to Italy to explore the management of competing minority cultural rights.

The leadership and management course, now in its third year, was delivered in partnership between the STRIPE Project, funded by the European Union’s PEACE III Programme, and Queen's University.
There are many examples of course graduates taking up leadership roles within their local community, whether that be within various community groups, the loyal orders, bands or politics. Indeed, two former students were elected as councillors in last month’s local government elections.


“I am delighted to participate in the STRIPE Young Leaders certificate presentation ceremony this evening. There is no doubt that STRIPE has produced an important and exciting development opportunity for the younger members of the Orange Order, by equipping the students with the necessary skills and experience to ensure not only that they can play a positive role within the community in the years ahead, but also to enable them to actively promote mutual understanding and reconciliation between different traditions and different parts of the community.
“I offer my congratulations to all who have completed this excellent course and wish them every success in putting what they have learnt into practice in the future.”


"An exciting part of this project is identifying young leaders, building their capacity and developing their skills so that they can play a full role in shaping society.”


“There were a number of benefits for those who participated on the course, including a recognised qualification from Queens University, Belfast. Students were also provided the opportunity to analyse the concept of leadership and the role that leaders play in initiating and implementing change and reform.”


There are currently more than 100 participants enrolled on this year's course with two classes at Queen's and a further class being held in Eglinton Orange Hall, Co Londonderry.

In April 2012, the Orange Order received a grant of almost £900,000 from the European Union to help address the legacy of the Troubles in the Protestant community, particularly in interface and border areas of Northern Ireland and the border counties of the Republic of Ireland.

Seven full-time staff are working on the project which is being financed until December 2014.

The STRIPE Project received £884,022 from the Special EU Programmes Body.

The Special EU Programmes Body is a North/South Implementation Body sponsored by the Department of Finance and Personnel in Northern Ireland and the Department of Finance in Ireland. It is responsible for managing two EU structural funds Programmes PEACE III and INTERREG IVA designed to enhance cross-border co-operation, promote reconciliation and create a more peaceful and prosperous society. The programmes operate within a clearly defined area including Northern Ireland, the Border Region of Ireland and in the case of INTERREG IVA, western Scotland.

The PEACE III Programme, funded under the European Regional Development Fund (ERDF), is worth €333 million and is aimed primarily at reinforcing progress towards a peaceful and stable society and promoting reconciliation. It focuses on helping Northern Ireland and the Border Region of Ireland to reconcile communities and contribute towards a shared society.

For more information on the SEUPB please visit www.seupb.eu

The parades in Limavady, Markethill and Larne will all provide an enhanced cultural experience as part of the biggest annual festival in Northern Ireland.

All three host districts will offer a varied programme of events surrounding their respective Twelfths, as well as the colour and pageantry associated with the largest day in the Orange calendar.

A total of 17 demonstrations are planned across the Province on July 12, all of which follow the traditional Rossnowlagh parade held in the Republic on the preceding weekend.

"The Tourist Twelfth Flagship programme has been developing since 2006 and we have seen excellent parades and festivals over the years. This year, we are enhancing our product through training in the World Host programmes for the Institution's flagships.

"This will include participation from a local school in one of the areas, which will enable students to gain accredited certification in the World Host programme to add to their CVs and hopefully assist them in the employment market.

"World Host is the only accredited hospitality programme in Northern Ireland and each flagship is providing a number of participants in it.

"In addition, we also want to work closely with the flagships to ensure that the best possible product is offered for visitors and tourists. The three areas selected this year reflect geographical and historical diversity and their parades will all be excellent as will other festival plans. We look forward to working with them and wish them well in all their efforts."

“The Grand Orange Lodge of Ireland’s announcement today that it has chosen Limavady, Markethill and Larne to host its flagship Twelfth demonstrations is welcome news.

“The flagship concept is aimed at those parades that want to broaden their appeal to draw a tourism audience and I am sure that those involved in the three selected demonstrations will provide a diverse and vibrant programme of events that visitors can enjoy.

“The colour and pageantry of the Twelfth is enjoyed by tourists from far and near and I hope many of them will take the opportunity to visit Limavady, Markethill or Larne to enjoy the spectacle of these flagship events.

“I wish the Grand Orange Lodge of Ireland every success with its preparations for the Twelfth.”

The 17 demonstrations on Saturday, July 12, will be held in:

There is one less Twelfth parade this year (usually 18) because Limavady is hosting a combined county demonstration for Londonderry (City of Londonderry and County Londonderry Grand Lodges).

A Twelfth demonstration will be held in Rossnowlagh, Co Donegal, on Saturday, July 5.
No comments: Links to this post